The Indian markets signed the day off on a good note helped by the global peers and good performance of metal and realty stocks in our domestic markets.

The Sensex opened at 16,692, tracking strong global cues. US markets advanced on Thursday as investor worry eased after China refuted a report that it was reviewing its euro-zone bond holdings due to the region's debt crisis. The Dow Jones added 284.61 points or 2.85% to close at 10,259 and the Nasdaq Composite Index gained 81.80 points or 3.73% at 2,277.

The BSE benchmark index advanced on the back of buying in metal scrips. The index pared some partial gains and continued to move sideways for the major part of the trading session. Extensive buying in the realty, metal and FMCG stocks saw the Sensex zoom to a high of 16,891 towards the end.

Shree Renuka Sugars rose around 10% on reports the company's billion-dollar acquisition of the world's largest sugar producer is on the verge of collapsing. The stock surged as concerns of assuming huge debt in the books of the firm arising from the large acquisition, receded.

Six stocks in which trading began in the derivatives segment from today, 28 May 2010, were mixed. Exide Industries (up 0.3%), Sobha Developers (up 2.24%) and Ruchi Soya added 4.5%. On the other hand Jindal Southwest Holdings (down 0.25%),  Gujarat Mineral Development Corporation (down 2%) and Hexaware Technologies declined 1%.

All the sectoral indices ended in the green, realty and metal indices advanced 4% each. The other major sectoral gainers were FMCG, auto, power and TECk, up 1-2% each. Parsvnath Developers and HDIL were the major gainers on the realty index, up 8-10% each. Sesa Goa was the top gainer on the metal index, up 11% at Rs 373 on the metal index.

Reliance Communications and Sterlite Industries added 6% each to Rs 147 and Rs 681, respectively. The other prominent gainers were Jindal Steel, DLF, Mahindra & Mahindra, ITC and Jaiprakash Associates, up 2-5% each. 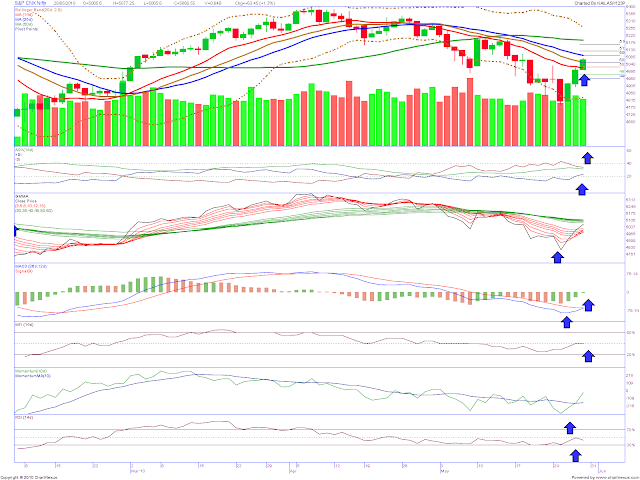 Posted by kailash chaturvedi at 8:30 PM