Daily Nifty chart indicating that same move will be continued on Friday too .

Daily Nifty chart indicating that same move will be continued on Friday too ...


The BSE benchmark Sensex slumped by 190 points on Thursday as investors booked the profits from Wednesday’s uplifting session, shaving off the gains made by blue chip firms like RIL and L&T entirely.
The 30-share Bombay Stock Exchange index, which rose by a whopping 484 points in the previous session, fell by 190.24 points, or 0.92 per cent, to settle at 20,497.64 at the end of Thursday’s trade.
Trade on Dalal Street was not overly bearish for most of the day and at one point of time, the Sensex touched a high of 20,854.55 — just 18 points shy of its record close of 20,873.33 on January 8, 2008.
The wide-based 50-share Nifty index of the National Stock Exchange also finished 0.91 per cent down at 6,177.35.
Reliance Industries, which has the maximum weightage in the Sensex pack, declined by 1.23 per cent to close at Rs. 1,059.
Engineering major L&T also saw heavy profit-booking and closed 3.16 per cent down — the most in the BSE-30 pack.
The banking sector was another space which saw brisk selling pressure. ICICI Bank fell by 1.76 per cent, SBI by 1.07 per cent, HDFC by 1 per cent and HDFC Bank by 0.88 per cent.
However, ahead of its September quarter results, IT major Infosys registered a smart 1 per cent gain amid the broader market weakness. Infy will kick-off India Inc.’s Q2 earning season by declaring its results on Friday.
http://www.thehindu.com/business/markets/article830063.ece
Wipro also saw upward movement and closed up by 1.31 per cent. 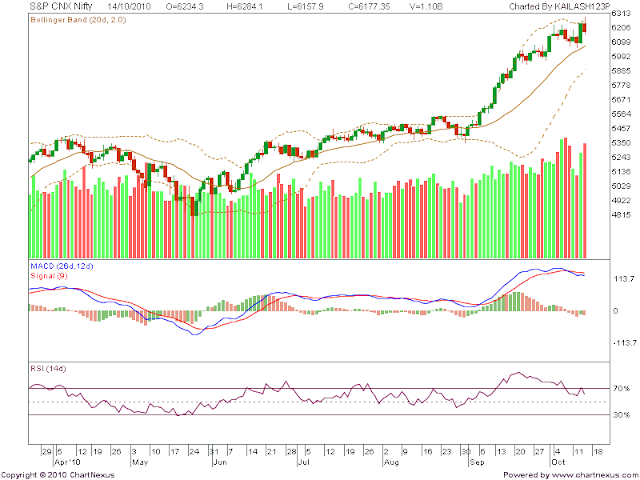 Posted by kailash chaturvedi at 5:43 PM