If you've lost money over the past 10 years, this statement may seem like a personal assault: 'Timing the market is easy and profitable.' That's the implied conclusion from a recent TrimTabs study.
What's the recipe? A recent Wall Street Journal article drew this lesson from the study: 'Over the past decade, it was actually quite simple to time the market. All you had to do was buy when the public was selling and sell when the public was buying.'
Naturally, going against the crowd is easier said than done. That's why it's often said that successful investing is simple, but it isn't easy.
Good investment opportunities come along only so often. Now seems to be the time. A good opportunity offers more profit potential than risk of losses.
Do the Opposite
'Buy when the public was selling and sell when the public was buying,' was the Wall Street Journal's conclusion. So, what's the public doing right now?
The public - this includes individual investors and Wall Street - is buying everything. Look around you, the S&P (SNP: ^GSPC), Dow Jones (DJI: ^DJI), Nasdaq (Nasdaq: ^IXIC), small caps, mid caps, international stocks (NYSEArca: EFA - News), emerging markets (NYSEArca: EEM - News), bonds (NYSEArca: AGG - News), gold (NYSEArca: GLD - News), silver (NYSEArca: SLV - News), and many other commodities (NYSEArca:DBC - News) are up, up, up. Meanwhile, the U.S. dollar (NYSEArca: UUP - News) is down.
According to Wall Street and the media, the investment universe is full of profit sweet spots. Stocks right now are a win-win scenario, at least so they say. Any bad news is viewed to bring about more quantitative easing and is, therefore, good news and good news is good news anyway.
Gold is another sweet spot. There's no need to worry about inflation or deflation. Gold is sure to profit either way, or so they say. From a fundamental point of view, gold is as sound an investment today as real estate was a few years ago. Of course with gold, this time is different. Isn't it always?
The U.S. dollar is doomed because more quantitative easing (more dollars in circulation) will reduce the value of the current dollars in the system. The government doesn't care if the dollar falls to oblivion, so why should you?
Engrained Opinions
Actually, there's a good reason to watch what's going on with the dollar. All the assets mentioned above (stocks, bonds and commodities) are denominated in dollars. A cheap dollar means higher prices and vice versa.
Over the past five months, the U.S. Dollar Index dropped as much as 15%. Interestingly, it's after a 15% slide that the greenback has become despised.  Investors dislike the dollar as much today as they did in late 2009 when it was about to lose its reserve currency status.
At that time, the ETF Profit Strategy Newsletter went out on a limb and predicted a major U.S. dollar rally. From November 2009 to June 2010, the dollar soared as much as 20%, a diabolical move for currencies. In June, when fears about Europe and a crumbling euro currency made the rounds (and optimism surrounding the dollar was plentiful), the newsletter called for a dollar correction.
Prediction #1 - The Dollar will Rally
This correction has morphed into a decline pervasive enough to push dollar sentiment to an extreme that, historically, has foreshadowed significant turnarounds.
The notion of a trend reversal is confirmed by technical indicators. Sunday night's Technical Forecast (part of the ETF Profit Strategy Newsletter) stated: 'Last week's dollar action was encouraging as the U.S. Dollar Index finished with a green candle low on Friday and since pushed above the lower acceleration band. That's what bottoms are made of.'
Friday's green candle low was followed by two more green candles. On Tuesday (October 19), the U.S. Dollar Index closed above its middle acceleration band.

As far as a candle formation goes, those are the initial stages of a trend reversal. Once again, a rising dollar is bad for stocks and commodities.
Prediction #2 - Commodities (Including Gold and Silver) Will Decline
Not only is the dollar way oversold, the commodity rally is stretched to a point where a sharp and prolonged reversal could happen any moment.
Net speculative positions in many commodities are at record highs, as is the percentage of bullish traders. We've seen time and again that extreme optimism is unhealthy for any market.
Albeit not a short-term timing tool, it's a big red flag. Once underway, the selling pressure should affect nearly all commodities, including oil (NYSEArca: USO - News) and agricultural commodities (NYSEArca: DBA -News).
Prediction #3 - Nasdaq Should Lead Equity Decline
It's been publicized surprisingly little that the Nasdaq 1000 (Nasdaq: QQQQ - News) has already moved above its April recovery high. This has largely been due to Apple's stellar performance.  The Nasdaq's performance from here will be very telling.
If it's able to establish support above Monday's $51.52 high, the slide in equity prices may be halted temporarily. If it isn't, watch out for a Nasdaq-led decline across the board.
Third One 'Free' - QE2 Won't Work
If you took a poll on Wall Street, 8 out of 10 Ivy League educated, Armani wearing, Mercedes driving Wall Street Banksters would probably tell you that QE2 will work.
The media agrees. When September's jobless numbers went public, the figures were much worse than expected, but stocks surged. Why? Associated Press headline: 'Faith in Fed pushes Dow past 11,000.'
When stocks slid on October 14, hope of QE2 kept things from getting worse. AP headline: 'Stocks dip; Likely Fed move keeps losses in check.'
QE2 may end up working for Wall Street, but it seems not to have worked for the economy. If it did work, why would we need QE2?
Obviously, the rumor of QE2 was enough to drive up stocks. Will the actual news deliver the steak or just the sizzle?
In POMO They Trust
The fact is that the Federal Reserve's Permanent Open Market Operation (POMO) purchases of Treasuries have had a direct and delayed effect on the market's performance. Certain purchases translated into positive performance 89% of the time (a detailed performance analysis and schedule of future POMO purchases is available in the November issue of the ETF Profit Strategy Newsletter).
Should You Fight the Fed?
Will the Fed win the tug-of-war against sentiment, valuations, and technical analysis, all of which point towards a correction, perhaps a drastic one?
If history is a guide, the market will win ... sooner or later. One way of navigating the current uncertainty is via support and resistance levels. A break through overhead resistance is likely to result in higher prices, while slicing through support may open the floodgates.
The ETF Profit Strategy Newsletter, along with the semi-weekly Technical Forecast, highlights the most recent and applicable support/resistance levels along with corresponding target levels.
Source http://finance.yahoo.com/news/Three-Outrageously-Contrarian-etfguide-4148417474.html?x=0&.v=1 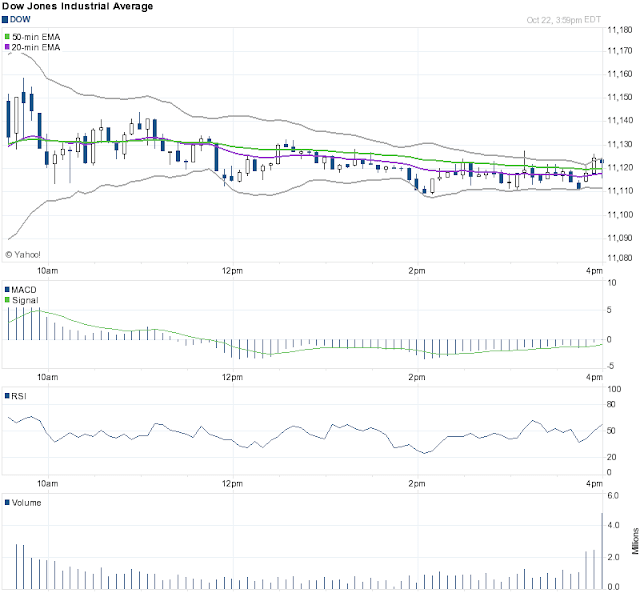