Dow closed down due to worries of foreclosure of banks


U.S. banks will be in the limelight next week as several household names report earnings and investors worry a forced halt to foreclosure proceedings could hit the sector and end the recent rally.
Bank shares fell sharply on Friday on very high volume, continuing a slide from the previous day. Although recovering some of their losses, Bank of America (BAC.N) shares hit their lowest in over a year, while the KBW bank index .BKX fell 2.4 percent.
Shares of Bank of America, the nation's largest mortgage lender, have fallen 9 percent during the week. Over 595.9 million shares of the company's stock traded on Friday, the most since April 2009 and over four times the 50-day moving average.
Investors worry banks did not follow proper due diligence when foreclosing on homes whose owners were not making mortgage payments, which could result in costly litigation, fines and additional mortgage repurchases.
Kevin Caron, market strategist at Stifel, Nicolaus & Co in Florham Park, New Jersey, said that situation could also weigh on the housing market if the uncertainty discouraged buyers from entering into contracts on properties under foreclosure.
"That speculative investor on the margin may choose to not to engage in that activity, which means there's the potential that you could have some weakness in demand, particularly in the lower-end speculative range of the housing market," he said.
BANK EXECS ON FIRING LINE
Investors will pepper bank executives with questions when those companies present earnings reports next week. Banks reporting results include Wells Fargo (WFC.N), Bank of America, and Citigroup Inc(C.N), three of the largest mortgage lenders in the nation.
The broad S&P financial sector is expected to show earnings of $27.7 billion in the third quarter, a 71 percent increase over a year earlier, although third-quarter revenue growth is seen falling 6 percent to $252.9 billion.
However, earnings estimates have been cut on some banks. Financials with the biggest reductions in earnings estimates for the quarter in the latest week are Goldman Sachs (GS.N), PNC Financial (PNC.N), and Citigroup, according to John Butters, director of U.S. earnings at Thomson Reuters.
The financial sector has been a conundrum in the latest market rally since the start of September. The KBW index .BKX has gained only 4 percent at a time when the broader S&P 500 has rallied nearly 12 percent.
David Giroux, who runs T. Rowe Price's $9.4 billion Capital Appreciation Fund, said expectations that deflation would weigh on bank earnings in the near term was pressuring the sector. He said banks were now attractively valued and the sector is the fund's largest, making up nearly 15 percent of assets.
"Most of the large banks are asset sensitive, which means that as rates rise, their profits should rise," he said. "So if you're a big believer in deflation, which the market has become a big believer in ... financials do poorly."
Giroux said a second round of stimulus from the Federal Reserve was unnecessary as inflation was already present in the system. Hopes the Fed will pump billions into the economy has helped drive stocks higher recently.
The Fed will release its Beige Book during the week and that will provide another insight into the central bank's thinking on the economy. On Friday, Fed Chairman Ben Bernanke hinted more monetary stimulus was on the way.
http://www.reuters.com/article/idAFN1520923920101015?rpc=44 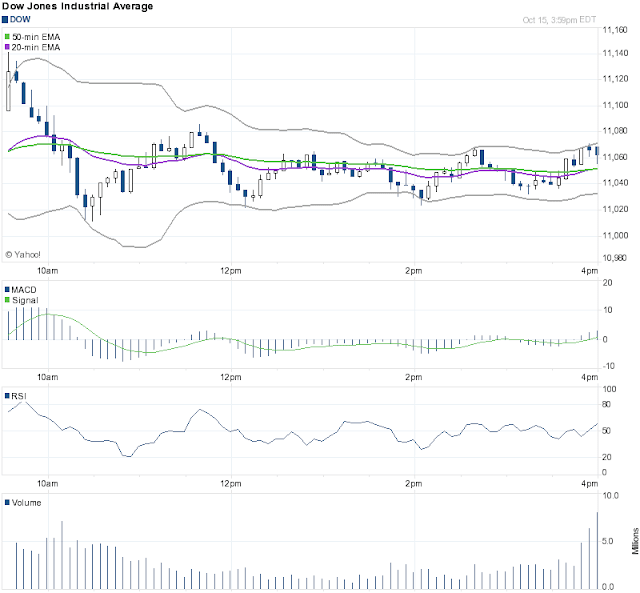