The Securities and Exchange Board of India had ordered the company to delist if public shareholding fell below the minimum limit. It also directed the Bombay Stock Exchange to facilitate valuation of shares to be purchased as per the above Securities and Exchange Board of India regulations and compulsorily delist the company, if the public shareholding reduces below the minimum level in view of aforesaid purchase.
Apart from imposing ban on Saminathan from dealing in the capital market for 10 years, the regulator had asked the company’s promoter to give an open offer to its shareholders by paying them the value determined under the Sebi delisting norms with in a period of three months.


Sebi decision comes after the company was found to have inflated its profits and revenues by fictitious entries in its accounts and disclosing the same in the quarterly and annual results for the financial year 2007-08, which misled the public in their investment decision.
Pyramid Saimira Theatre is also accused of alloting warrants to Saminathan on a preferential basis and subsequently allotting equity shares on conversion of such warrants without a monetary consideration towards the issue of such warrants and shares. “The fictitious entries in the books of accounts with a view to paint a rosy picture about the financial health of the company mislead the investing public and constitute worst kind of fraud on the part of the company, management and promoters,” the Sebi order stated.
http://www.indianexpress.com/news/pyramid-saimira-soars-20-per-cent-on-open-offer-talks/729092/1 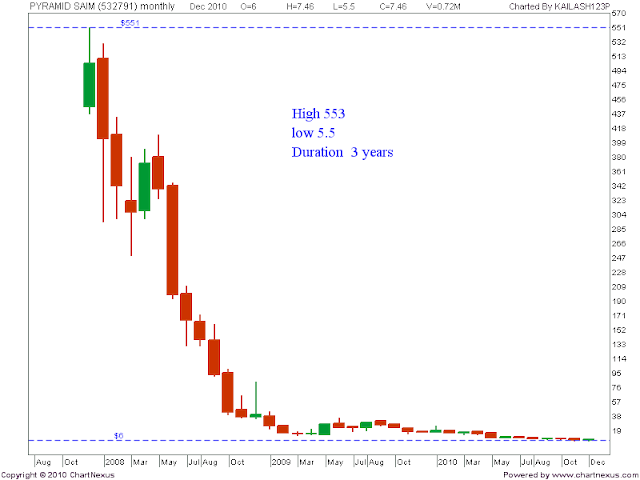 Posted by kailash chaturvedi at 11:26 AM