The S&P clung to a two-year high on Friday as investors predicted a pause as volumes are expected to dry up in the days ahead, and after a 5 percent gain already so far in December.
The last two weeks of the year are traditionally quiet, and therefore market moves are less meaningful to the overall trend, which took the S&P 500 to a two-year high early this week.
Some indicators imply investors have grown complacent. The CBOE Volatility index (Chicago Options:^VIX - News), a measure of expected volatility on Wall Street, fell to its lowest level since April, dropping 7.4 percent to 16.11.
"The bullish camp is -- I'm sure -- very pleased at the day-after-day, slow steady increase they are engineering," said Larry McMillan, president of options research firm McMillan Analysis in a research note. "But below the surface, tensions are building, and they will likely explode to the downside in a sharp, but perhaps only short-lived, correction."
Some indicators are pointing to an overbought market such as high levels of bullishness, often seen as a contrarian indicator, as well as a high call to put ratio, indicating investors may be complacent about hedging a fall in prices.
http://finance.yahoo.com/news/Wall-Street-hovers-at-highs-rb-4045286499.html?x=0&.v=10 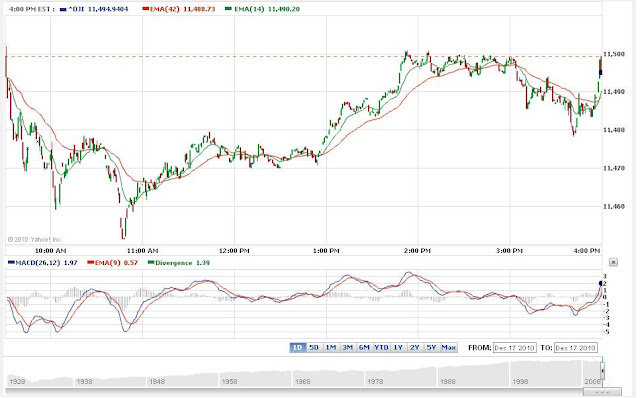