Stocks finished at multi-year highs Wednesday lifted by a bullish outlook for financials and reduced concerns about European debt.
he Dow Jones Industrial Average rose 84 points, or 0.7%, to close at 11,755, a two-year high and the blue-chip index's second consecutive gain. The S&P 500 advanced 11 points, or 0.9%, to settle at 1286, and the Nasdaq Composite gained ground for the third straight day, rising 20 points, or 0.7%, to close at 2737.
Overall market breadth was largely positive as well with 70% of stocks finishing higher while 28% gave up ground. About 960 million shares traded on the New York Stock Exchangeand 1.8 billion shares changed hands on the Nasdaq.
The Federal Reserve's beige book report showed that the economy was growing at a moderate pace, with some areas such as consumer spending and manufacturing showing signs of strength. Loan demand conditions came in mixed, while real estate was still weak.
The beige book is a summary of economic activity across the Fed's 12 reporting districts, that is used at the monthly policy-setting meeting.
Notably, the report highlighted some signs of inflationary pressures in the economy, citing rising costs for manufacturers and retailers. But they maintained that the upward pressure on wages was still very limited.
Still, the comments on inflation were a departure from the central bank's earlier stance that inflation was subdued. Phil Flynn, analyst at PFGBEST, says the Fed is right to be concerned about inflation. According to him, the Fed has been reluctant to acknowledge the rise in commodity prices as job growth was lacking and it regarded some inflation as a better outcome than deflation.
But now, with the labor market showing some signs of strength, Flynn says, officials might be a little more concerned. "It is both good news and bad news," said Flynn. "On the one hand, the economy is improving. But when the economy gets better, here comes inflation."
http://www.thestreet.com/_yahoo/story/10971255/1/the-stock-story-jan-12.html?cm_ven=YAHOO&cm_cat=FREE&cm_ite=NA 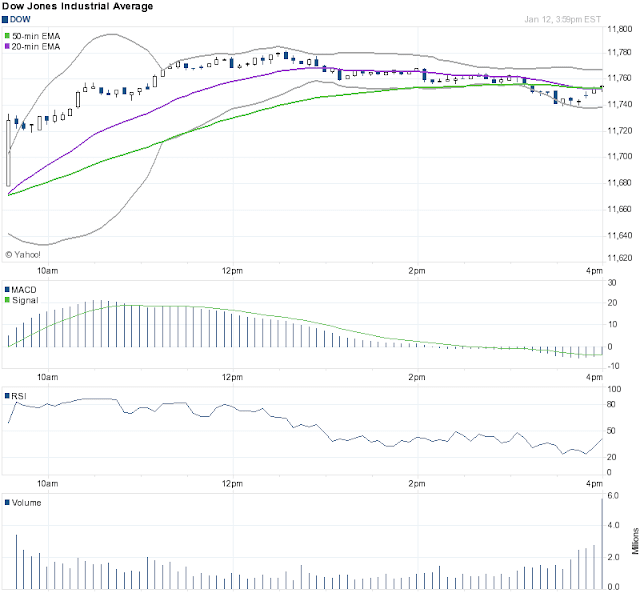