The Nasdaq jumped to a 10-year high as U.S. stocks rallied on Wednesday after Fed Chairman Ben Bernanke's first-ever press conference did nothing to short-circuit investors' optimistic outlook on the economy.
All three major U.S. stock indexes extended gains after comments from Bernanke at his press conference, where he reiterated the Fed's stance that inflation was a transitory problem related largely to commodity price pressures.
The Nasdaq Composite Index closed at 2,869.88, its highest close since December 12, 2000. Among the day's leading Nasdaq gainers were retailers and biotechnology names.
The Russell 2000 Index (^TOY - News) hit an all-time closing high of 858.31 as investors kept buying small-caps, a sector associated with a strong outlook for economic growth.
Tom Sowanick, chief investment officer of OmniVest in Princeton, N.J., said the Federal Reserve is "inviting asset inflation" as reflected in the stock market's price action.
The Fed's policy-setting Federal Open Market Committee said in a statement it intends to complete its $600 billion bond buying program in June as scheduled.
At the news conference, Bernanke said there was "a bit less momentum in the economy" and he foresaw "a relatively weak number, maybe under 2 percent" for growth in gross domestic product in the first three months this year, indicating the Fed is likely to maintain its accommodative policy despite worries about inflation.
"He handled himself real well. He didn't fumble anything," said Alan Valdes, director of floor trading at DME Securities in New York. "In all honesty, I would give him a B-plus. He held himself up well. He didn't trip over any questions."
After the closing bell, Starbucks Corp (NasdaqGS:SBUX - News) warned that rising fuel and dairy costs will take a bigger chunk out of earnings than previously anticipated, sending shares down 1.8 percent to $36.54 in extended trade.
Volume was modest, with about 7.59 billion shares traded on the New York Stock Exchange, NYSE Amex and Nasdaq, slightly below the daily average of 7.73 billion.
Advancers outnumbered decliners by a ratio of almost 2 to 1 on the New York Stock Exchange, while on the Nasdaq, eight stocks rose for every five that fell.
http://finance.yahoo.com/news/Nasdaq-ends-at-10year-high-in-rb-2371107980.html?x=0&.v=16 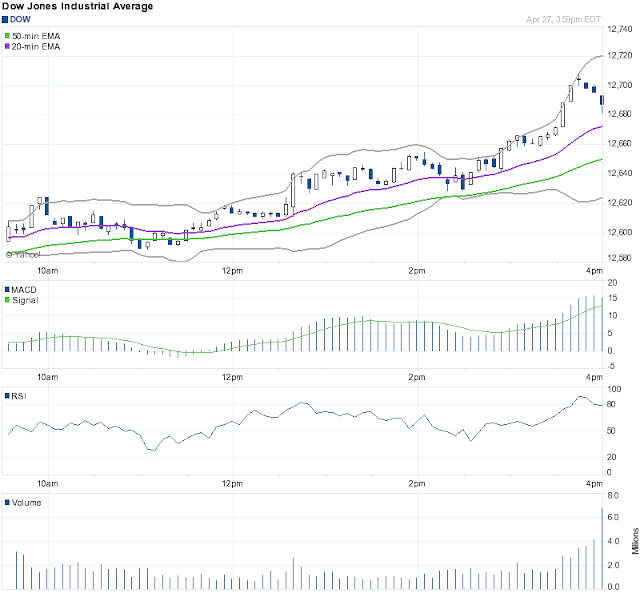