we predicted .....greatest reversal pattern is on chart ....Doji...wait for confirmation signal ..and go short for minimum ....
when dow closed at.12807.00
http://dhanvarshagrp.blogspot.com/2011/05/dow-in-dilemma-closed-flat-move-000.html
and today we are seeing it at 12584...almost 216 points down....
U.S. stocks fell sharply on Thursday, extending losses into a fourth day for two of the benchmark indexes, as equities and commodities were hit after a surprise rise in jobless claims.


“Earnings season started out strong and is ending strong. This is more about macro-driven concerns and about the level of growth in the economy, and ratcheting down expectations,” said Owen Fitzpatrick, head of the U.S. equity group at Deutsche Bank.
“The economic data, other than manufacturing, in the month of April was quite weak,” said Fitzpatrick, who added the jump in applications for unemployment benefits doesn’t bode well for Friday’s payrolls data.
Down for the third session this week, the Dow Jones Industrial Average DJIA -1.10%   fell more than 200 points, and finished down 139.41 points, or 1.1%, at 12,584.17, with 27 of its 30 components sliding, led by Aloca Inc. AA -2.63%  , off 2.6%. Exxon Mobil Corp. XOM +0.11%  was the biggest point drag on the index, and ended down 2.6%.
http://www.marketwatch.com/story/us-stocks-hit-by-surprise-rise-in-jobless-claims-2011-05-05?siteid=yhoof 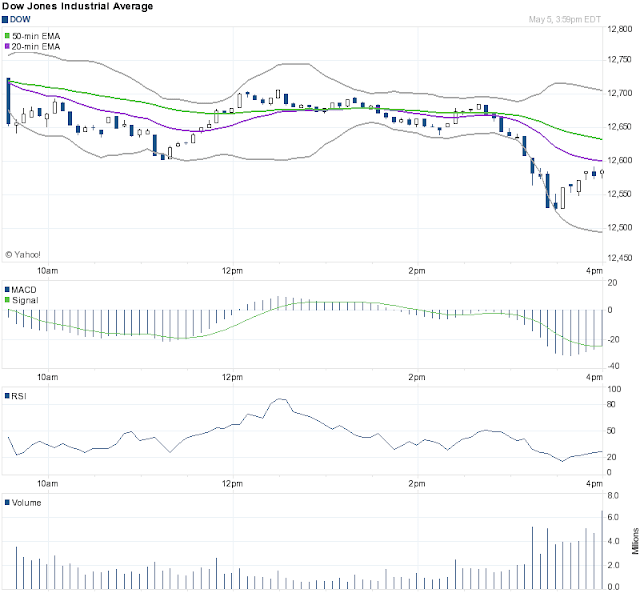 Posted by kailash chaturvedi at 5:56 AM