Stocks finished higher Wednesday, getting a bounce after the recent bout of heavy selling as eurozone contagion fears eased.


Fitch Ratings provided some relief from concerns about Europe's debt situation as it said it doesn't foresee any ratings action on German banks as a result of their exposure to Greece, but warned of high contagion risks if there was a restructuring of Greek sovereign debt. Fitch also said most German banks don't have significant direct exposure to risk relating to Portugal and Ireland.
"The worst consequence of any Greek sovereign default for German and other European banks would be a sharp increase in general capital market and creditor risk aversion at a time when many banks are still in rehabilitation mode," said Michael Dawson-Kropf, a Frankfurt-based senior director, in a recent note.
The dollar was flat-lining against a basket of currencies, with the dollar index trading at $75.87.
"The market is kind of tepid today. There's not a lot of activity today and the durable goods number wasn't a good one. We're still in this sideways trading pattern driven by the strength or weakness of the U.S. dollar," said Jay Suskind, senior vice president at Duncan Williams.
Suskind said the market will likely need clearer direction regarding whether the economy is in a soft patch or facing more prolonged weakness to break from its current trading pattern.
"In the last couple of weeks, we've seen softer economic numbers. If we begin to see stronger employment and economic numbers, then I think the market may start to do better because investors will see that it was just a soft patch, but on the flip side, if we continue to see softer reports, we could see the market move lower."
Softness in the greenback lifted energy and basic material stocks, which were among Wednesday's strongest performing sectors.
http://www.thestreet.com/_yahoo/story/11132788/1/stock-market-story-may-25.html?cm_ven=YAHOO&cm_cat=FREE&cm_ite=NA 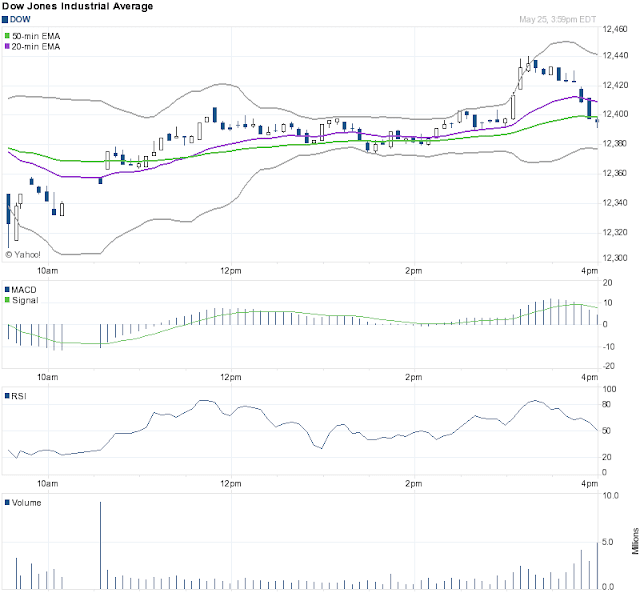