Stocks fell on Thursday as Fed Chairman Ben Bernanke backed off hints additional near-term stimulus could be on the way, removing a possible catalyst from a market already facing plenty of obstacles.
Bernanke said in a second day of testimony that the U.S. central bank would be ready to inject more money should the economy get worse. He said the time had not come yet, undercutting comments from a day earlier that spurred a late-day rally.
"You're seeing a push and pull, with earnings continuing to be strong on the micro level, but event-risk issues like Bernanke and global debt, on the other hand," said Wayne Lin, a money manager at Baltimore-based Legg Mason Inc, which manages $671 billion.
"The market is volatile, trading off these one-line comments from Bernanke."
The Dow Jones industrial average (DJI:^DJI - News) slid 54.49 points, or 0.44 percent, to close at 12,437.12. The Standard & Poor's 500 Index (^SPX - News) shed 8.85 points, or 0.67 percent, to finish at 1,308.87. The Nasdaq Composite Index (Nasdaq:^IXIC - News) dropped 34.25 points, or 1.22 percent, to end at 2,762.67.
Stocks climbed on Wednesday as investors took Bernanke's remarks before a House panel as signaling the possibility of more stimulus for the economy if the outlook worsens. The central bank's most recent stimulative program contributed to strong equity gains since September.
The S&P 500 appeared to find support on Thursday near 1,300, limiting deeper losses.
"The market has pretty sharp downside momentum before it came up against 1,300," said Mark Arbeter, chief technical strategist for Standard & Poor's in New York. "It might take the market a couple of days to put in a bottom, but if we see a renewed decline in the dollar, stocks will work higher."
GOOGLE JUMPS LATE
Technology stocks were Thursday's top decliners, extending a losing streak to a second day. The Merrill Lynch Semiconductor HOLDRS Trust (Pacific:SMH - News) lost 1.3 percent to $32.46, just below its 200-day moving average.
Google Inc (NasdaqGS:GOOG - News) shares shot up 12.3 percent to $594.50 in after-hours trading after the Internet giant reported adjusted quarterly earnings that exceeded Wall Street's most bullish forecasts.
The stock had fallen 1.7 percent in Thursday's regular session to close at $528.94. Following Google's results, Nasdaq futures rose 0.2 percent.
During the regular session, News Corp (NasdaqGS:NWSA - News) shares fell 3.1 percent to $15.44 on heavy volume after the U.S. Federal Bureau of Investigation said it would probe allegations that the company hacked into the phone records of victims of the September 11, 2001, attacks on the United States.
Worries about a deadlocked debate over U.S. budget cuts and raising the debt ceiling further soured investor sentiment.
Moody's announced late on Wednesday that it might cut the United States' prized triple-A credit rating. Moody's cited the increasing risk that Congress would not raise its $14.3 trillion debt ceiling in time to avert a default, which investors and experts say could roil financial markets.
"There could be further volatility -- which is code for going down -- as we near the deadline, but the market thinks the debt ceiling will be raised," said Kent Engelke, chief economic strategist at Capitol Securities Management in Richmond, Virginia. "If it didn't, we'd be down 5,000 points right now."
Declining stocks outnumbered rising ones by a ratio of about four to one on the New York Stock Exchange while on the Nasdaq, more than three stocks fell for every one that rose.
Volume was light, with about 7.44 billion shares traded on the New York Stock Exchange, the American Stock Exchange and Nasdaq, below last year's daily average of 8.47 billion.
http://finance.yahoo.com/news/Bernanke-halts-Wall-Street-rb-2094964014.html?x=0&.v=22 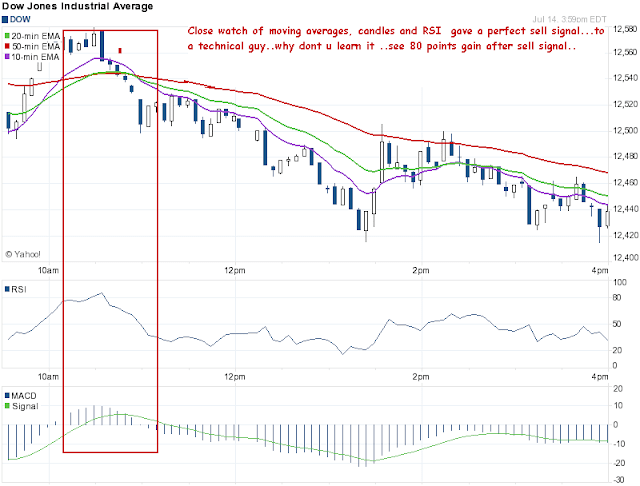