The Dow Jones Industrial Average rallied after President Obama signaled his support for a deal that would cut the deficit by $3.7 trillion.
The ambitious plan has been gaining support from Democrats and Republicans, and includes changes to Medicare and the tax code but not to Social Security.
The Dow finished up 202 points, or 1.7%, at 12,597. The S&P 500 also rallied on the news, gaining 21 points, or 1.6%, to 1327. The Nasdaq climbed 61 points or 2.2% to 2827, its biggest one-day gain since October 2010.
"This is the first sign that [lawmakers] are coming to an agreement on the debt ceiling," said Jim Paulsen, chief investment strategist at Wells Capital Management. "There was a big discount in the market for fear and a potential Armageddon ... if it turns out better, there's room to move up."
Yields of long-term Treasuries slid to 2.871%, with the benchmark 10-year Treasury rising 17/32. The euro gained 0.2% against the U.S. dollar, which slipped 0.3% against a basket of currencies.
Fading fears of a U.S. debt default triggered a gold selloff. August futures were last dropping $13.40 to $15.89 an ounce, well off Monday's record high above $1,600. August crude oil contract gained $1.76 to trade at $97.69 a barrel.
http://www.thestreet.com/_yahoo/story/11189778/1/stock-market-story-july-19.html?cm_ven=YAHOO&cm_cat=FREE&cm_ite=NA 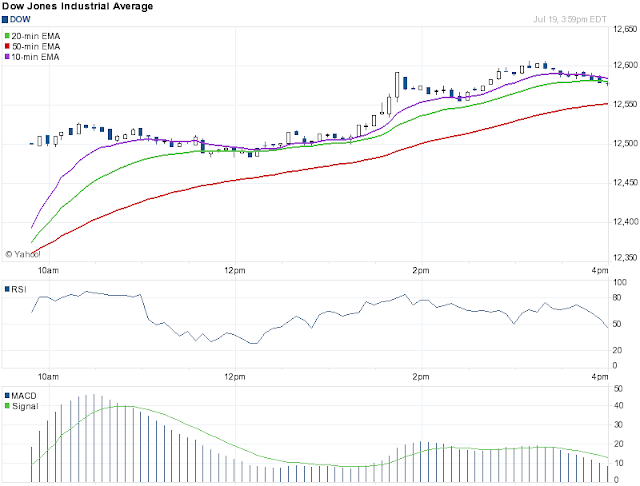