U.S. stocks close up on day, slip for week

U.S. stocks rose Friday, moderating weekly losses, as earnings from Citigroup Inc. and Google Inc. offset worries about the U.S. borrowing limit and a sharp drop in consumer confidence.
The political events in play had President Barack Obama addressing a Friday news conference in Washington, where he warned that failure to raise the U.S. debt limit would set off a default on U.S. obligations that could drive up interest rates for all Americans, which he said would be “effectively a tax increase for everybody.”
Prospects that U.S. lawmakers would fail to reach an agreement on borrowing limits and spending cuts proved a sideshow for stocks.
“If the resolution wasn’t priced in, the market would be substantially lower than where it is,” said McIver at Jensen Portfolio.
Lawmakers face an Aug. 2 deadline to reach a deal to raise the debt ceiling, with Treasury Secretary Tim Geithner reiterating on Thursday that the nation’s borrowing authority would run out should Congress fail to act.
Beyond the stalled U.S. budget talks, the sovereign-debt crisis overseas was also on investors’ minds, as eight banks failed Europe’s second round of stress tests with a combined capital shortfall of 2.5 billion euros, or $3.5 billion.
Also limiting the day’s gains, the Thomson Reuters/University of Michigan survey showed consumer sentiment unraveling last month to its lowest reading since March 2009. The preliminary reading of the index fell to 63.8 from 71.5 the prior month.
Support came from corporate headlines.
http://www.marketwatch.com/story/us-stocks-lose-gains-after-sentiment-data-2011-07-15?siteid=yhoof 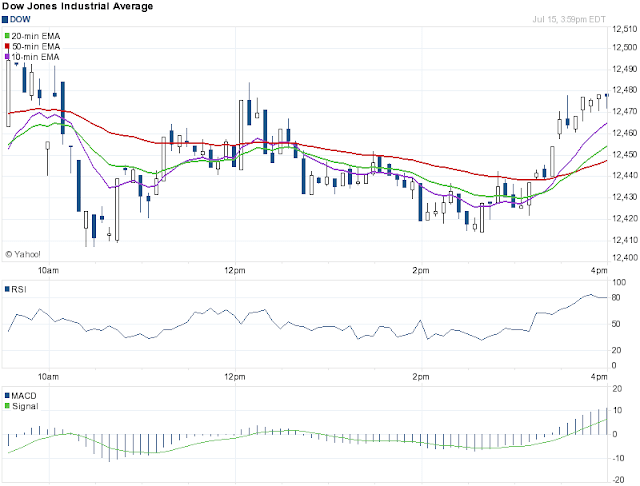