Stocks stopped a three-day slide on Wednesday, but the market is likely to get hit in the coming session after Moody's said it could cut the United States' prized triple-A credit rating.
Stock index futures dropped sharply after Moody's Investors Service said it may cut the United States' triple-A rating due to the rising chance its $14.3 trillion debt ceiling may not be raised by the August 2nd deadline. Failure to increase the country's borrowing limit in time would result in a U.S. default, which could roil financial markets.
Concerns about the debt ceiling have been a headwind for equities as no budget deal has been brokered. S&P futures slumped on the news but recovered modestly, and were down 4.8 points, or 0.4 percent.
"What has been beginning to spook Moody's and some other people is that Congress may be dumb enough to actually default on the debt," said Cliff Draughn, chief investment officer of Excelsia Investment Advisors in Savannah, Georgia. "Clearly any instability of a large nation with the world's reserve currency defaulting on its debt -- it's never happened before."
In Wednesday's session, the three major U.S. stock indexes rose more than 1 percent at their peaks after Fed Chairman Ben Bernanke suggested the Fed would consider additional measures to support the economy if the outlook gets worse. Energy and materials stocks led gains, but the rally fizzled in afternoon trading.
"Bernanke's comments were a positive this morning, but we had a little too much happiness early on," said Richard Sichel, chief investment officer of Philadelphia Trust Co. "The comments were not upbeat by any means, and obviously, no one wants the economy to get to the point where more stimulus is needed."
The Fed's $600 billion bond-buying effort, known as QE2, has contributed to huge equity gains since September.
In testimony to the House Financial Services Committee, Bernanke said "the recent economic weakness may prove more persistent than expected ... implying a need for additional policy support.
Stock investors had put a low probability on any more stimulus from the Fed, but June's dismal jobs report altered some perceptions.
http://finance.yahoo.com/news/Wall-Street-ends-higher-rb-634282506.html?x=0&.v=14 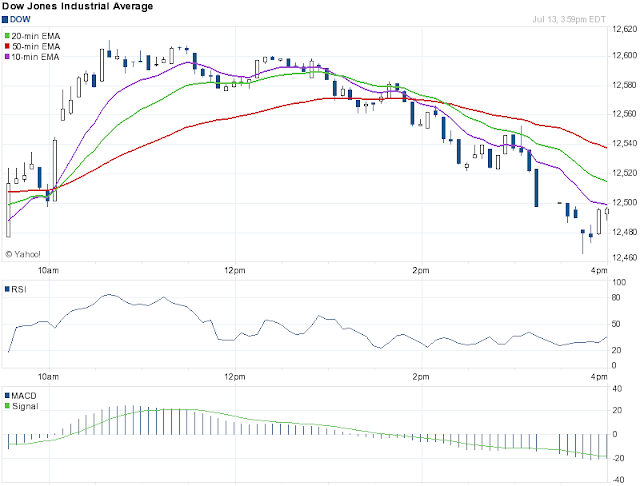