Do not trade on news.... trade seeing technical indicators ....

Reuters | 02:47 PM,Sep 14,2011
MUMBAI (Reuters) - SREI Infrastructure Finance shares fell as much as 14 percent on Wednesday and the company said it had hired KPMG to look into allegations of financial irregularities concerning tower company Viom Networks. "We initiated it (the probe) ourselves," Sunil Kanoria, vice chairman of SREI Infrastructure and a director with Viom Networks told Reuters. "It is a board-run company, a professionally run company. When we got (the letter) we decided to investigate, because we believe in corporate governance," Kanoria said. Viom is a joint venture between telecom carrier Tata Teleservices and SREI Group firm Quippo. SREI Infrastructure shares fell as much as 14 percent on Wednesday but pared losses to trade 2.7 percent lower by 0850 GMT. Viom's board received a letter from a former company secretary stating there is a "misappropriation" in the company, Kanoria said. Tata group holds about 53 percent and Hemant Kanoria, director of Viom and chairman and managing Director of SREI, together with Infrastructure Development Finance, Oman Investment Fund and Government of Singapore Investment Corporation, hold a little over 46 percent. Media reports said as much as 3 billion rupees ($63 million) may have been diverted. ($1 = 47.595 Indian rupees) (Reporting by Rajesh Kurup; Editing by Subhadip Sircar and Matthew Driskill)
Posted here ...
and trapped a to z short sellers those shorted at open ...
Stock which was was having 60  to 70 trades per day  traded 1411 lots ..
Closed 3 % up after negative news and 14 % fall.. 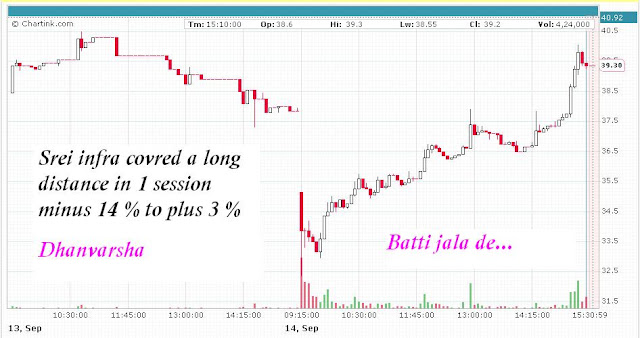 Posted by kailash chaturvedi at 6:29 AM