Recognition Criteria:
1. We see it at a market top or during an uptrend.
2. It is characterized by its small real body at the upper end of the trading range and it is located above the trend. The color of the body is unimportant.
3. It has a lower shadow, which is at least twice the height of the real body.
4. There is either no upper shadow or a very short upper shadow.Explanation:The hanging man is a bearish reversal pattern. It signals a market top or a resistance level. Since it is seen after an advance, a Bearish Hanging Man Pattern signals that selling pressure is starting to increase. The low of the long lower shadow indicates that the sellers pushed prices lower during the session. Even though the bulls regained their footing and drove prices higher by the finish, the appearance of this selling pressure after a rally is a serious warning signal.Important Factors:
Ideally; the lower shadow of the Bearish Hanging Man Pattern must be two or three times the height of the real body. However, a long lower shadow may not have to be twice the height of the real body in the real life conditions in order to signal a reversal. The pattern is more perfect if the lower shadow is longer.
The Bearish Dragonfly Doji Pattern is a more bearish signal than the Bearish Hanging Man Pattern and it is also more reliable than the Bearish Hanging Man Pattern.
If a Bearish Hanging Man Pattern is characterized by a black real body, it shows that the close was not able to get back to the opening price level, which has potentially bearish implications.
We need a confirmation of the reversal on the next day for a more definite proof about the reversal of the uptrend. This confirmation may be in the form of a black candlestick, a large gap down or a lower close on the next trading day.Source... 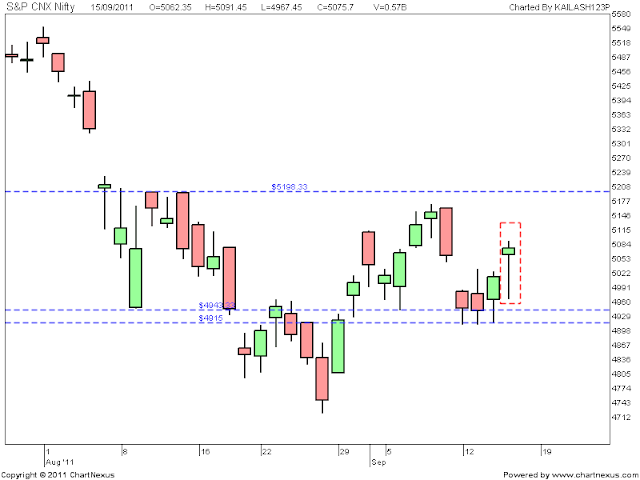 Posted by kailash chaturvedi at 7:35 PM