U.S. stocks extended gains into a third session Wednesday after German Chancellor Angela Merkel and French President Nicolas Sarkozy reaffirmed their support for Greece, giving temporary relief to concerns about an impending euro-zone default.
“It appears Angela Merkel and Nicolas Sarkozy are doing to right things to ensure they (the Greeks) have the horsepower to back up the avoidance of default,” said Mark Luschini, chief investment strategist at Janney Montgomery Scott.
The Dow Jones Industrial AverageDJIA +1.27% ended up 140.88 points, or 1.3%, at 11,246.73. It had fallen as much as 112 points during see-sawing morning trade dominated by reports on Europe.
Stocks found direction, sending the Dow up as much as 281 points, after Merkel, Sarkozy and Greek Prime Minister George Papandreou talked by conference call Wednesday. The French and German leaders said they were confident Greece will remain in the euro zone, according to media reports that cited government spokespeople. The leaders also reaffirmed support for a late July plan that’s designed to prevent a Lehman Bros.-style financial panic.
The market’s volatility is indicative of “extreme valuations on one side and extreme uncertainty on the other,” said David Kelly, chief market strategist at J.P. Morgan Funds. At the end of last week, for instance, stocks were cheaper relative to Treasurys since anytime since the early 1950s.
The uncertainty stems nearly entirely from Europe, according to Kelly.
Source... 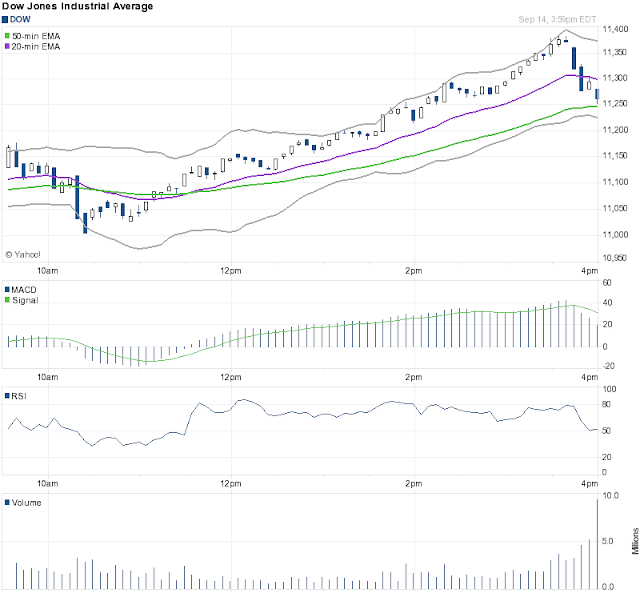