Financial stocks pared earlier gains in Friday’s shortened session, helped along by a credit downgrade of Belgium in the final trading hour, and turned in a large loss for the holiday week.
http://www.marketwatch.com/story/financial-stocks-lead-broader-market-higher-2011-11-25?siteid=yhoof2


Stocks posted seven straight sessions of losses on Friday, ending the worst week in two months, as the lack of a credible solution to Europe's debt crisis kept investors away from risky assets.
Wall Street traded higher for most of the abbreviated session on hopes that "Black Friday," the traditional start of the U.S. holiday shopping season, would support major retailers. But gains were quickly offset by headlines out of Europe that further dented market sentiment. With less than 20 minutes before the close, all three stock indexes had turned negative.
Yields on Italy's debt approached recent highs that sparked a sell-off in world markets. Italy paid a record 6.5 percent to borrow money over six months on Friday, and its longer-term funding costs soared far above levels seen as sustainable for public finances.
High debt yields from major economies in Europe such as Spain, France and Germany suggest investing in the region is seen as being more risky.
"Trading remains cautious (since) the poor auction of German bonds mid-week raised concerns the debt crisis is spreading to Europe's core," said WhatsTrading.com options strategist Frederick Ruffy.
Adding to concerns, Standard & Poor's downgraded Belgium's credit rating to double-A from double-A-plus, citing concerns about funding and market pressures.
http://finance.yahoo.com/news/Stocks-suffer-worst-week-2-rb-2719872341.html?x=0 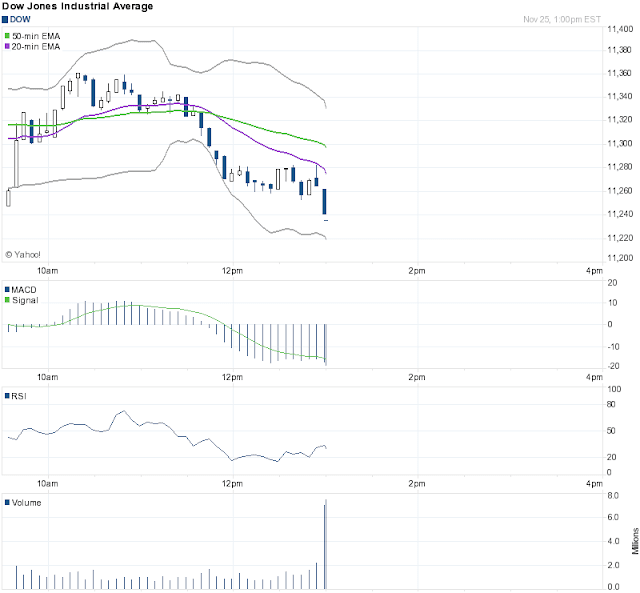