It is advised to book profit in long positions ...
Short Ambujacem at 159 to 165  with s/l of 171 to 175 closing basis  and possible target of 130 >>>120 within 2 months ...
Weekly chart Ambujacem is showing that ...
Trading at tripple top reversal level
Earlier fell to 120 level from this level in 11 weeks
Hanging man candle stick is formed .
History repeats 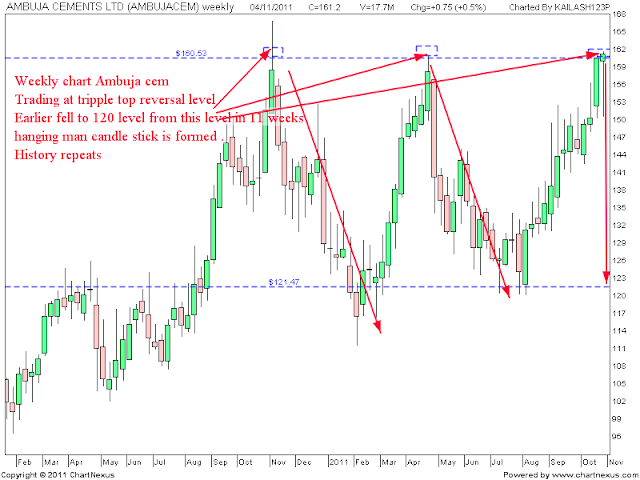 While the three peaks should be sharp and distinct, the lows of the pattern can appear as rounded valleys. The pattern is complete when prices decline below the lowest low in the formation. The lowest low is also called the "confirmation point."
Bulkowski advises that this pattern can have many variations. He continues, however, to advise that an investor should ensure that the three peaks are well separated and not part of a congestion pattern. "Each top should be part of its own minor high, a distinct peak that towers about the surrounding price landscape."
Elaine Yager, Director of Technical Analysis at Investec Ernst and Company in New York and a member of Recognia's Board of Advisors suggests they should be noticeably distinct peaks and they do not have to be precisely at the same level.

Why is this pattern important?

Like the head and shoulders top which it resembles so closely, the triple top is considered by experts to be a reliable pattern. According to Schabacker, there is a good explanation for placing reliance on this pattern. The pattern illustrates three successive attempts to break through a resistance level. Price cannot move above a certain point, despite three tries. "Each failure adds weight to the indications of reversal," explains Schabacker.

Is volume important in a triple top?

Generally, volume in a triple top tends to be downward as the pattern forms. Murphy advises that volume should be lighter on each rally peak.Volume then picks up as prices fall under the confirmation point and break into the new downward trend.
Both Bulkowski and Schabacker place less significance on the downward progression of volume. While both agree that investors should see relatively high volume on the first peak, they also agree that volume on the other peaks can be confused and irregular. Volume should be higher on the peaks than at the lows. Bulkowski's statistics suggest that an investor should see a volume burst at the time of breakout and during the few days following the decline in price below the confirmation point.
Read more ..
Bearish Hanging Man

As with any single candlestick, confirmation is required. The Hanging Man formation shows the price goes much lower than the open then closes near the opening price. This could mean that many longs have positions that they are attempting to sell. Ideally, a black real body Hanging Man with a lower open the following day could be a bearish signal for the days ahead. 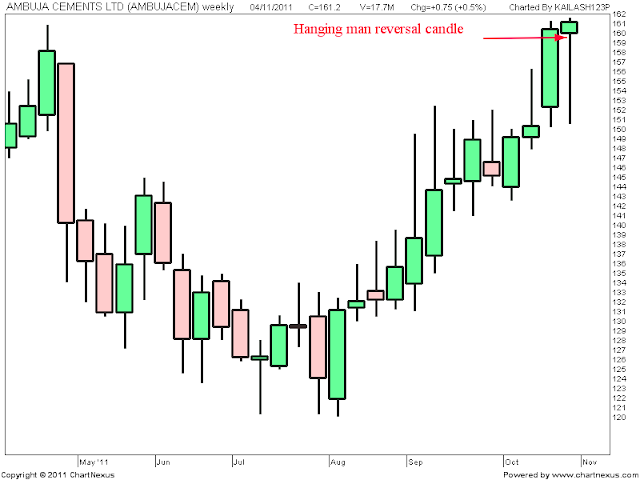 News ....
ACC Ltd and Ambuja Cement saw profits for the July-September quarter fall short of market estimates on Tuesday as rising costs pressured margins and demand in India remained weak.
http://in.reuters.com/article/2011/11/01/idINIndia-60246420111101
Smart investors closing their positions rapidly continuously since last 4- 5 sessions ....
will you still hold it ?
or planning to book profit at this top level..
It is advised to book profit in long positions ....