U.S. stocks end up on Berlusconi plans to quit

U.S. stocks overcame a choppy session to end decisively higher Tuesday on reports Silvio Berlusconi would resign as prime minister of Italy as the country works to reign in its debt.
Berlusconi offered to step down as soon as Italy’s Parliament approves austerity measures in a vote expected to occur next week. Italy’s surging borrowing costs have added to investor concerns about Europe, where the chance of a messy default in Greece recently sent shockwaves through markets.


“Europe is driving a lot of risk assessment in global markets,” said Stephen Wood, chief market strategist for Russell Investments.
The Dow Jones Industrial AverageDJIA +0.84%  added 101.79 points, or 0.8%, to 12,170.18, with 28 of its 30 components on the advance.
The S&P 500 Index SPX +1.17%  gained 14.80 points, or 1.2%, to 1,275.92, with energy and materials stocks gaining the most among its 10 sectors.
The Nasdaq Composite IndexCOMP +1.20%  rose 32.24 points, or 1.2%, to 2,727.49.
For every stock falling, nearly three gained on the New York Stock Exchange, where 879 million shares exchanged hands.
Stock indexes had meandered between gains and losses earlier in the day, after a vote by Italian lawmakers in which Berlusconi’s budget won parliamentary approval, but without a majority — leaving open the question of whether he’d stay in office. Read more about Italy, Berlusconi.
While there were never any expectations of a quick resolution to the European Union’s efforts to contain its debt trouble, the latest uncertainty had Wall Street focused on what normally would have been a routine vote in Italy to approve last year’s budget. The measure passed, but with too many abstaining for Berlusconi to claim a majority.
“I think we are still in the risk-on, risk-off environment, by and large... We are [still] watching events in Europe, which has a political problem and needs a political solution,” said Wood.
Source...Market Watch 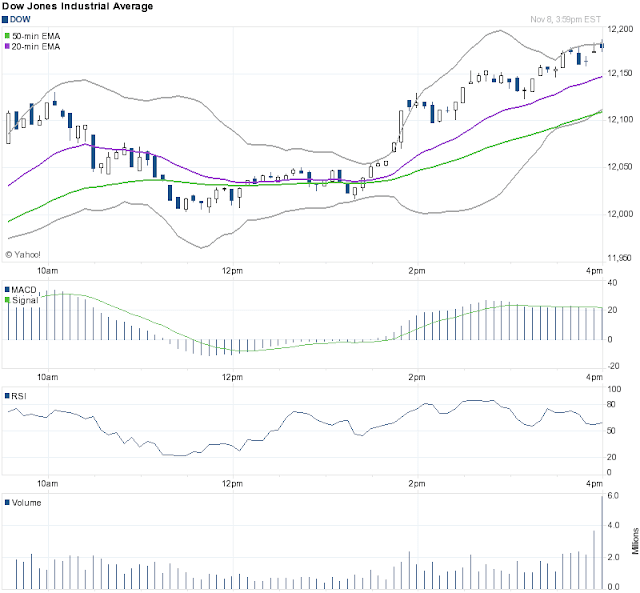