U.S. stocks plummeted by more than 3% Wednesday as investors feared that a worsening debt crisis in Europe was dragging Italy into the mix.


Worries over the fate of Europe's third largest economy shook the market after Italy's borrowing costs topped a new record. The sharp downturn came even as Prime Minister Silvio Berlusconi offered to resign yesterday, suggesting that investors were skeptical that new leadership could steer the country out of its debt troubles. Furthermore, Greece was still stuck in a chaotic debate over who would replace its own outgoing prime minister.
Two negative headlines may have helped push stocks further in the afternoon--Bloomberg cited a report by German business newspaper Handelsblatt saying German Chancellor Angela Merkel wants to allow countries to exit the euro. Also, Reuters reported that Germany and France have explored the possibility of overhauling the European Union, further suggesting that the two nations are growing weary of bearing responsibility of their debt laden neighbors.
While equities rallied Tuesday after news of Italian prime minister Silvio Berlusconi's planned resignation, by Wednesday investors seemed to dig deeper into the question of whether a new government would really change Italy's fiscal fate. The European Central Bank has sent clear signals that it cannot help boost Europe's emergency rescue fund, leaving investors questioning where additional funds will come from. In the meantime, pressure has dialed up on the International Monetary Fund to step in and intervene.
Political uncertainty in Italy, combined with a move by clearinghouse LCH.Clearnet to hike the initial margin required to trade Italian bonds mobilized a snowball effect that helped trigger soaring yields before the open. Italian 10-year yields surged by 65 basis points to 7.4%, breaching a crucial 7% threshold that increases the risk of possible Italian default.
"Some are even saying that Italian bond yields have become the new fear index, like the VIX," said Charles Reinhard, deputy chief investment officer at Morgan Stanley Smith Barney, of Wednesday's record yields.
"Just when it seemed safe to assume that the path of least resistance for the euro was more likely located in a northerly direction, an increase in LCH.Clearnet margin on Italian government bond trading has tripped up the unit," noted Miller Tabak economist Andrew Wilkinson.
Read more... 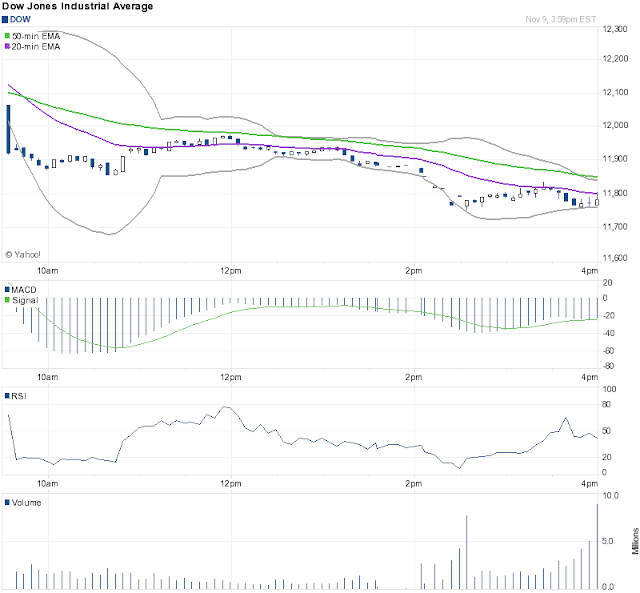