Stocks recovered late in Tuesday's session after an influential European Central Bank member provided reassurances that the eurozone crisis will eventually be brought under control.
The Dow Jones Industrial Average gained 84 points, or 0.7%, to close at 12,067. The S&P 500added 8 points, or 0.6%, to settle at 1261, while theNasdaq increased 9 points, or 0.3%, to finish at 2695 amid light volumes.


Stocks rallied after Bloomberg reported that ECB governing council member Jürgen Stark told an audience at a conference in Lucerne, Switzerland that the eurozone crisis will be brought under control within two years.
For much of the day, stocks were lower on worries that political missteps in Europe's third-largest economy could drive Italy further into debt purgatory. The Dow was down more than 100 points at its lowest point of the session.
A vote on budget reforms in Italy Tuesday will effectively test the leadership of Prime Minister Silvio Berlusconi, who faces pressure to resign from office. The yield on 10-year Italian government debt has jumped since Friday, hitting a 14-year high of 6.67% on Monday and signaling heightened nervousness that political turmoil will prevent Italy from dealing with its debt problems.
"The question is whether Italy will be the next domino to fall," said Paul Nolte, director of investments with Dearborn Partners. "Equity markets are narrowing in on Italy's ability to work out a deal."
Meanwhile, the situation in Greece looked more stable after the country came to an agreement to accept an aid package from its European neighbors that will allow Greece to avoid default in the near term. News that Greek Prime Minister George Papandreou will resign, making way for an interim administration led by a former European Central Bank vice president, gave the markets some clarity about the country's future.
Earlier, London's FTSE lost 0.3% and Germany's DAX fell 0.7%. Japan's Nikkei Average finished down 0.4%, and Hong Kong's Hang Seng lost 0.8%.
Read more... 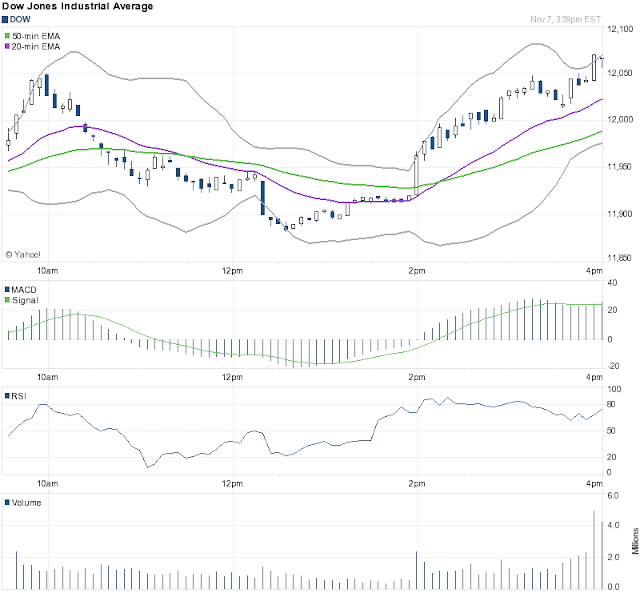