RCOM is making double bottom within 6 months
ready for reversal
two white soldiers  after a spindle bottom are inviting u to go long  because we may see third one today ..
its result is gud and beats analysts estimates
http://www.businessweek.com/news/2012-05-26/reliance-communications-profit-beats-estimates-on-phone-usage
Buy RCOM  in cash/futures at or above 66 for positional targets of 72 -79 -85 -91 -96  in less than 90 days period .stop loss 60 closing basis .
buy RCOM in  cash / futures at and above  66 for intraday   targets 68  70  72  74
sl 63.90
stay invested above 60/- 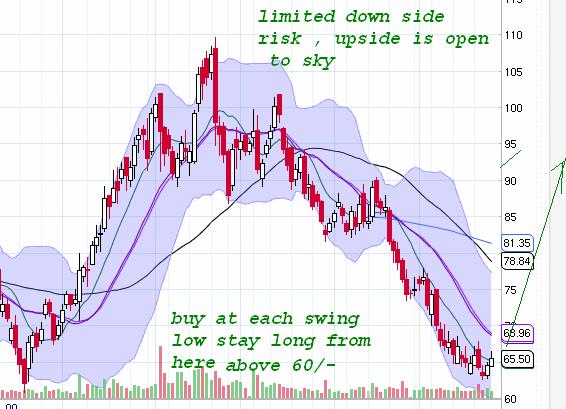 Definition:
Bullish Three White Soldiers Pattern is indicative of a strong reversal in the market. It is characterized by three long candlesticks stepping upward like a staircase. The opening of each day is slightly lower than previous close rallying then to a short term high.Recognition Criteria:
1. Market is characterized by downtrend.
2. We see three consecutive long white candlesticks.
3. Each candlestick closes at a new high.
4. The opening of each candlestick is within the body of the previous day.
5. Each consecutive day closes near or at its highs.
Explanation:
The Bullish Three White Soldiers Pattern appears in a context where the market stayed at a low price for too long. The market is still falling down and it is now approaching a bottom or already at bottom. Then we see a decisive attempt upward shown by the long white candlestick. Rally continues in the next two days characterized by higher closes. Bears are now forced to cover short positions.
Important Factors:
The opening prices of the second and third days can be anywhere within the previous day's body. However, it is better to see the opening prices above the middle of the previous day's body.
If the white candlesticks are very extended, one should be cautious about an overbought market.
The reliability of this pattern is very high, but still a confirmation in the form of a white candlestick with a higher close or a gap-up is suggested.
Posted by kailash chaturvedi at 8:55 AM