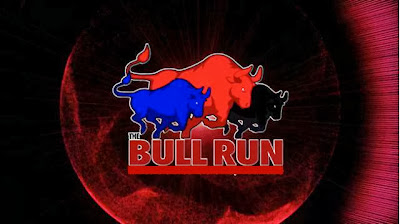 Key indices extended its upmove to second consecutive week after RBI reduced the rate under the marginal standing facility (MSF) by 50 basis points to 9%, and introduced lending to banks for 7 days and 14 days. The longer-tenure repos will result in primary liquidity infusion of ~`190bn in the market.

Another sentiment booster was the surprisingly better than expected trade deficit numbers. Deficit narrowed to a two-and-a-half-year low in September to US$6.7bn, the lowest level since March 2011, compared with US$10.9bn in August.

The coming week will see the market reacting to a slew of corporate earnings by index heavyweights like RIL, HDFC Bank, TCS, Bajaj Auto, Axis Bank, L&T and HCL Tech. Other important data points to look out next week are September inflation and CPI data. Infosys
Q2 results are out and we believe, one needs to wait a couple of quarters to turn constructive on the stock. The improving revenue growth trajectory and better management commentary should bode well for Indian IT sector. 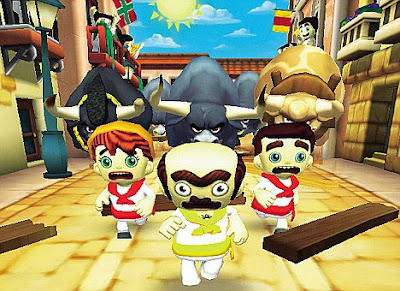 The nifty future has seen fresh addition of long position, while some short unwinding was seen in Bank Nifty. The VWAP level for the nifty future is at 5950 which might act as a support in near
term. On option front 5900 strike put has seen huge addition of short position, while call buying was seen at 6200 and 6250 strike. Fresh long addition has been seen in Banking , Auto and
Realty sector. For the week Nifty might trade in range of 5950-6300. 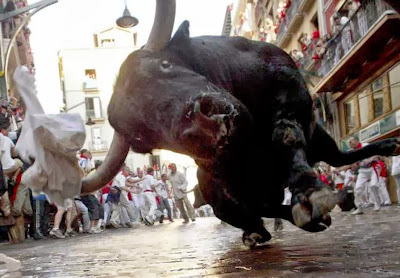 On the daily chart, Hanging Man candlestick is seen, which suggests some signs of indecisiveness in the market at higher levels. However as long as Nifty holds above the the trendline breakout of 5,950, the trend remains positive. The implication of top being formed in Nifty will be confirmed on weekly close below 5,950, till then dips should be used as a buying opportunity.

We reiterate with our short term perspective, stating that it is difficult to take any stand as the political uncertainty in US has made the job of short term prediction a difficult one. We advocate investors to remain on the sidelines unless more unequivocal situation emanates from US political landscape.

US FOMC policy meeting revealed that most of the Federal Reserve members endorsed the decision to start tapering the monetary stimulus at the end of this year and conclude the program by the middle of the next year. Meanwhile, US Republicans have put forward a proposal for temporarily extending the debt ceiling deadline. Republican’s inclination to avert a possible U.S. default and effectively resuming US government services have soothed concerns to an extent. However, the meeting between President Barack Obama and Republicans has failed to yield any results as Obama has not yet accepted the proposal to raise the debt ceiling for six weeks. It seems that US President will be only interested if the plan of hiking the debt ceiling and re-opening of US government has no strings attached.

Markets are delicately poised in the light of US government shutdown entering the tenth day and the country approaching October 17 debt ceiling deadline. Prolonged shutdown of US Government make a probable consensus on the debt ceiling in the near future will eventually take away the prop from the prices. 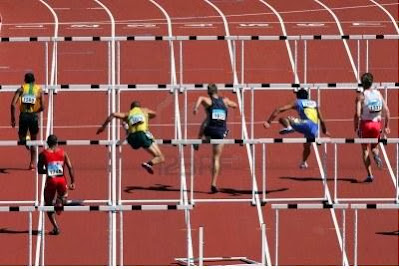 Nifty future closed positive at 6130.50 levels. Open Interest of Nifty future increased by 7.04% with a rise in price by 3.02% from the last week. In this week, nifty future has been making higher highs from last five consecutive sessions and moved up to 6143 levels. Bank Nifty future witnessed built up of long position as OI was up by 6.70% with the rise in price by 4.03% from the previous week. 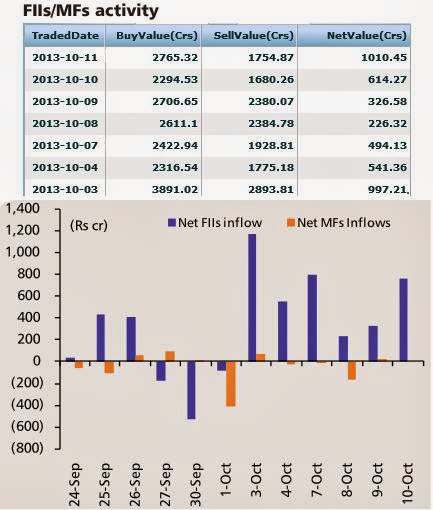 Put Call Ratio based on Open Interest of Nifty moved in a range from 1.08 to 1.11 levels, if the Put Call Ratio sustains above 1.10 levels, then positive move may continue in the market.

HV (Historical Volatility) of Nifty fell down from 31.35 to 28.20 levels and Implied Volatility of Nifty (which is calculated from the movement of option prices) moved down from 25.45 to 23.54 levels. 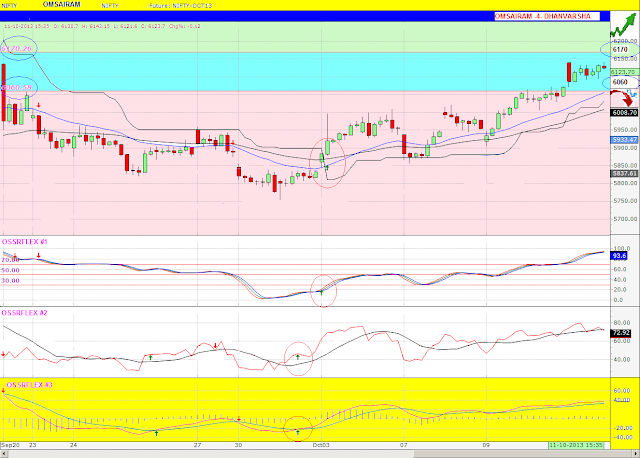 Nifty futures continued its positive momentum and closed above 6100 levels at highest closing in last 21 weeks. Now it is near to crucial hurdle of 6170 zone, if it moves above 6170 then we may see a fresh move towards 6300 levels. If Nifty future fails to hold above 6170 and moves down below 6060, then momentum may fizzle out and it can go down towards 5950-5900 levels. October series would be more of stock specific ahead of corporate results, we are expecting volatilities to rise, so keep the position hedge by respective puts. 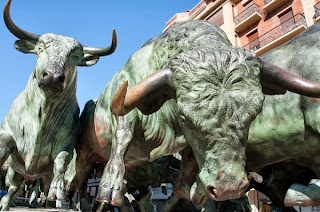 OMSAIRAM
Posted by Unknown at 2:04 AM